A few weeks back I received in the mail a package from Stark Bro's.  This is becoming a regular thing around the homestead, yet is always very exciting!  There were some Almond (here and here) and Fig tree's (here), which I'm quite excited about, a replacement pack of raspberries (I waited too long to plant them, grr!), and a replacement Reliance grape vine (here), which is doing quite well btw.  While those were all neat and nice, the plant I'm super stoked about is my Sweet Lifeberry Goji bush.


One thing I didn't read (I usually do read the directions, honestly!) this time was that potted plants are supposed to be hardened off.  This means setting them out in the sun for short periods of time, each day a little longer than the day before... yea, I didn't do that... and shortly after planting it, all the leaves fell off. Three weeks later, this little fighter is up and running!

While that's exciting for me, the most exciting part about this whole endeavor is that I'm propagating it, successfully!  When I pulled the plant out of the pot it was growing in, there was a huge tangle of roots that had hit the pot and started to grow in circles around the plant.

Eventually what will happen is as the roots get bigger they strangle the tree/bush.  Obviously this is not desirable... but it is something you absolutely must watch out for whenever you buy a potted plant!  I've had this on some fruit trees (I got for free), blueberries as well as this Goji berry.  Most of the time the best way to handle it is to take a knife and cut the roots by running the blade up and down the root bundle at a depth of about an inch, cutting off all the circling roots.  In this case, however, I simply ripped off a bunch of roots, set them aside, and stuck the plant in the ground.  This is where it get's exciting for me!

When I ripped the roots off the bottom of the root ball, there was at least one stem that had grown up and out of the pot and had leaves on it.  This one went straight into a pot with potting soil in it... and is currently taking off like a rocket!  (I gave it a good bit of babying to be honest)

A few other roots looked promising as well... and a few were just a gamble with nothing to loose.  There was one big root without any hint of anything that looked like it wanted to grow upwards... it got shoved into a pot and is just now peeking up out of the ground... er, it used to be.


More than one of the plants I've started came out of the pot looking like nothing more than a bundle of roots...


In the picture above you can see a root that I pulled off the bottom of the original pot.  At first glance it's just a root and I normally wouldn't think anything of it.  HOWEVER, I had a similar root I just stuck in some dirt just to see what would happen, and it grew!  Look again closely where the red arrows are pointing towards and you can see how there is just a tiny little nub of growth on the root.  If that is close enough to the surface and kept moist enough, that should turn into another plant for me... score another for Team Clinton!


The picture above is what those little growth nubs should look like any day now.  This is the other root I tossed into the dirt and now I have, possibly, two new plants growing...  this is kinda fun!

In conclusion, it looks like my single plant from Start Bro's has turned into 5, 6, maybe 7 plants and counting.  The moral of the story is a little cliche, but that doesn't change the truth now does it?

Just give it a shot... you might fail, but you might not!  The only way you'll succeed is to try and you'll only fail if you never try.


Hopefully next time I can show you how I was able to get my Bush Cherries to root out... and let me know if you've ever tried something like this!

I now have about ten plants from the one I purchased.  When I planted them, they were all doing awesome with lush green leaves... that is slowly changing to a yellow leafless plant and I suspect it is due to the acidic soil that is in my yard.  You may want to make sure your soil is a little more on the alkaline side when you plant your plants, or add crushed oyster shells to the mix.
Posted by Cj at 1:01 PM No comments: 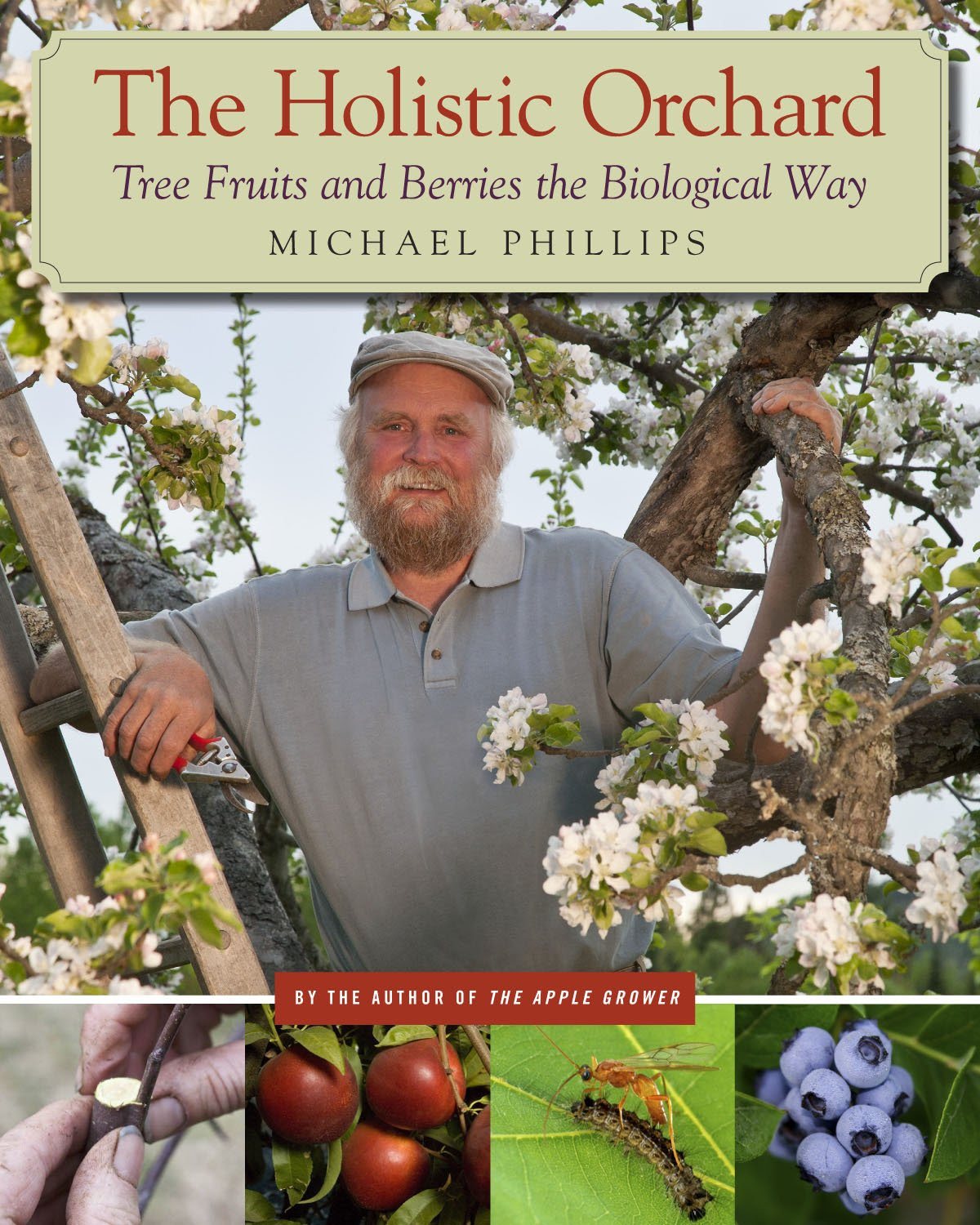 In a recent post I gave a review of The Holistic Orchard.  While writing my post for that review I discovered there was a book, so naturally I checked it out from the library too! I've been reading it for about two months now, it seems, and have learned an amazing amount of knowledge!

Let me summarize and leave you with this...

He covers so much I won't even try to describe it... but here's what the Amazon description has to say:

"Many people want to grow fruit on a small scale but lack the insight to be successful orchardists. Growing tree fruits and berries is something virtually anyone with space and passionate desire can do - given wise guidance and a personal commitment to observe the teachings of the trees. A holistic grower knows that producing fruit is not about manipulating nature but more importantly, fostering nature. Orcharding then becomes a fascinating adventure sure to provide your family with all sorts of mouth-watering fruit.
The Holistic Orchard demystifies the basic skills everybody should know about the inner-workings of the orchard ecosystem, as well as orchard design, soil biology, and organic health management. Detailed insights on grafting, planting, pruning, and choosing the right varieties for your climate are also included, along with a step-by-step instructional calendar to guide growers through the entire orchard year. The extensive profiles of pome fruits (apples, pears, asian pears, quinces), stone fruits (cherries, peaches, nectarines, apricots, plums), and berries (raspberries, blackberries, blueberries, gooseberries, currants, and elderberries) will quickly have you savoring the prospects.
Phillips completely changed the conversation about healthy orcharding with his first bestselling book, The Apple Grower, and now he takes that dialogue even further, drawing connections between home orcharding and permaculture; the importance of native pollinators; the world of understory plantings with shade-tolerant berry bushes and other insectary plants; detailed information on cover crops and biodiversity; and the newest research on safe, homegrown solutions to pest and disease challenges.
All along the way, Phillips' expertise and enthusiasm for healthy growing shines through, as does his ability to put the usual horticultural facts into an integrated ecology perspective. This book will inspire beginners as well as provide deeper answers for experienced fruit growers looking for scientific organic approaches. Exciting times lie ahead for those who now have every reason in the world to confidently plant that very first fruit tree!"
Posted by Cj at 12:18 PM No comments:

A wrap-up of Rome in April


You'll have to forgive me for being late... we had an early delivery last week and life has been a little more exciting lately!


Things have been amazingly crazy this month.  My youngest, roughly 18months old, spent some time in the hospital last month and this month they spent a good bit of time trying to figure out what was wrong with him.  After being poked too many times and multiple trips to the hospital (an hour away), they don't really know what happened to him or why his blood counts were way low (Red cells, white cells, bone marrow cells, etc).  But after coming out of the hospital, we have now invested some $'s in essential oils as well as Manuka Honey for his staph infection on his leg, skin level.


(I just like to say that... it may not be a true farm yet, but the property does have a farm number!)  In addition to medial issues, I've been trying my hand at some plant propagation.  I started with what I had on hand.... box wood, lavender, bush cherry, burning bush and a few others.  I'll save you the wonder and let you know that, so far, it's not working... is March too early to start in zone 5b?  Anyway, here's some pic's...


It didn't work out, with the exception of the boxwood cuttings... they are still alive.  I should note that I put a plastic bag over each pot to keep the humidity up... but perhaps they just go too hot?  We'll see what happens... maybe next time I'll try out a technique called "Air Layering".


So not too long ago I mentioned an expanding effort taking place in our home as well... well it's not too far away and I'm not quite done with the bunk beds.  At this point I just need to put some slats across and throw the mattresses on top... sort of.  Anyway, here they are a few days go...

(UPDATE: I hate it when I don't measure twice and cut once... in this case, my mattress from high school must have been a tall single mattress, as it does not fit.  A new on is on order...) 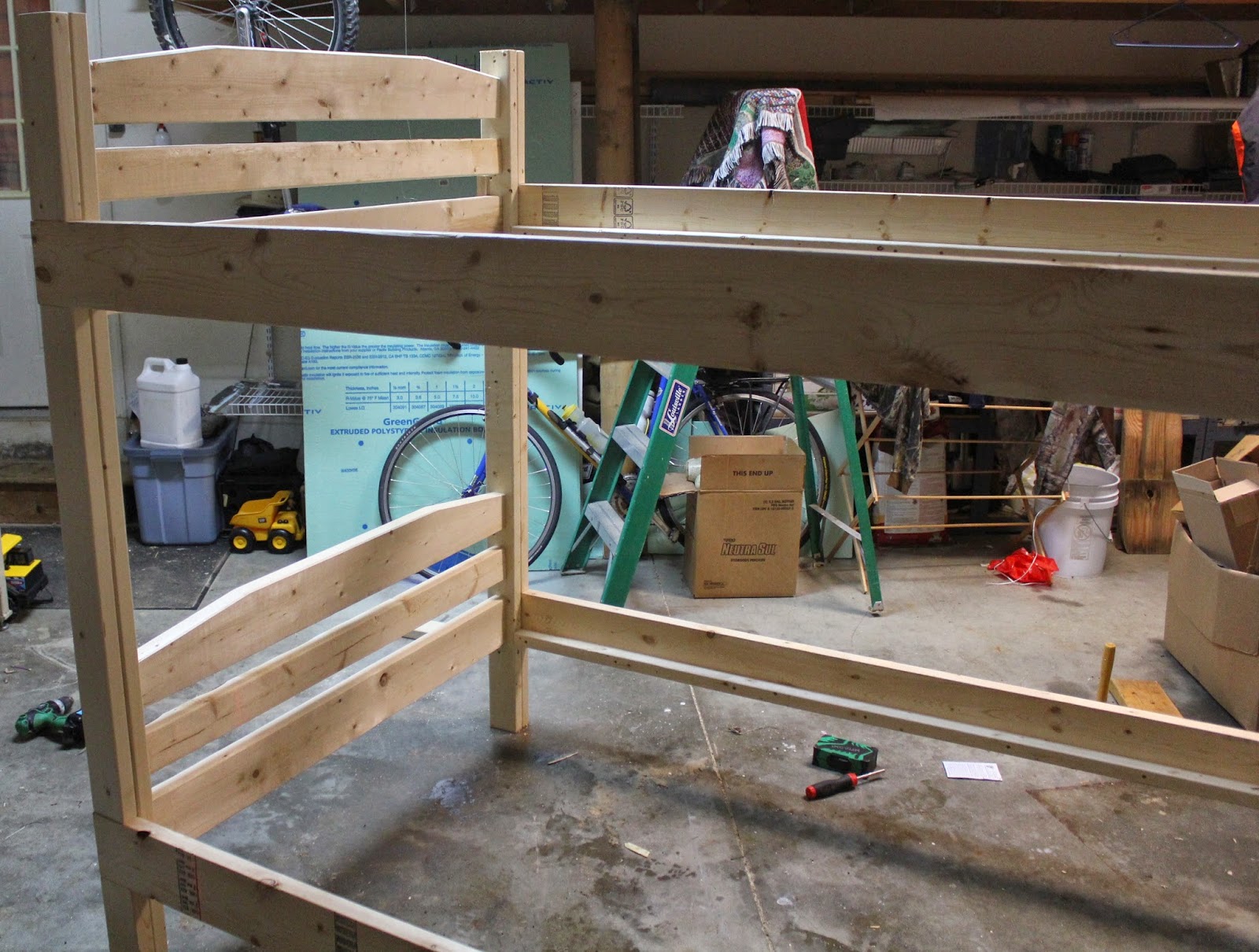 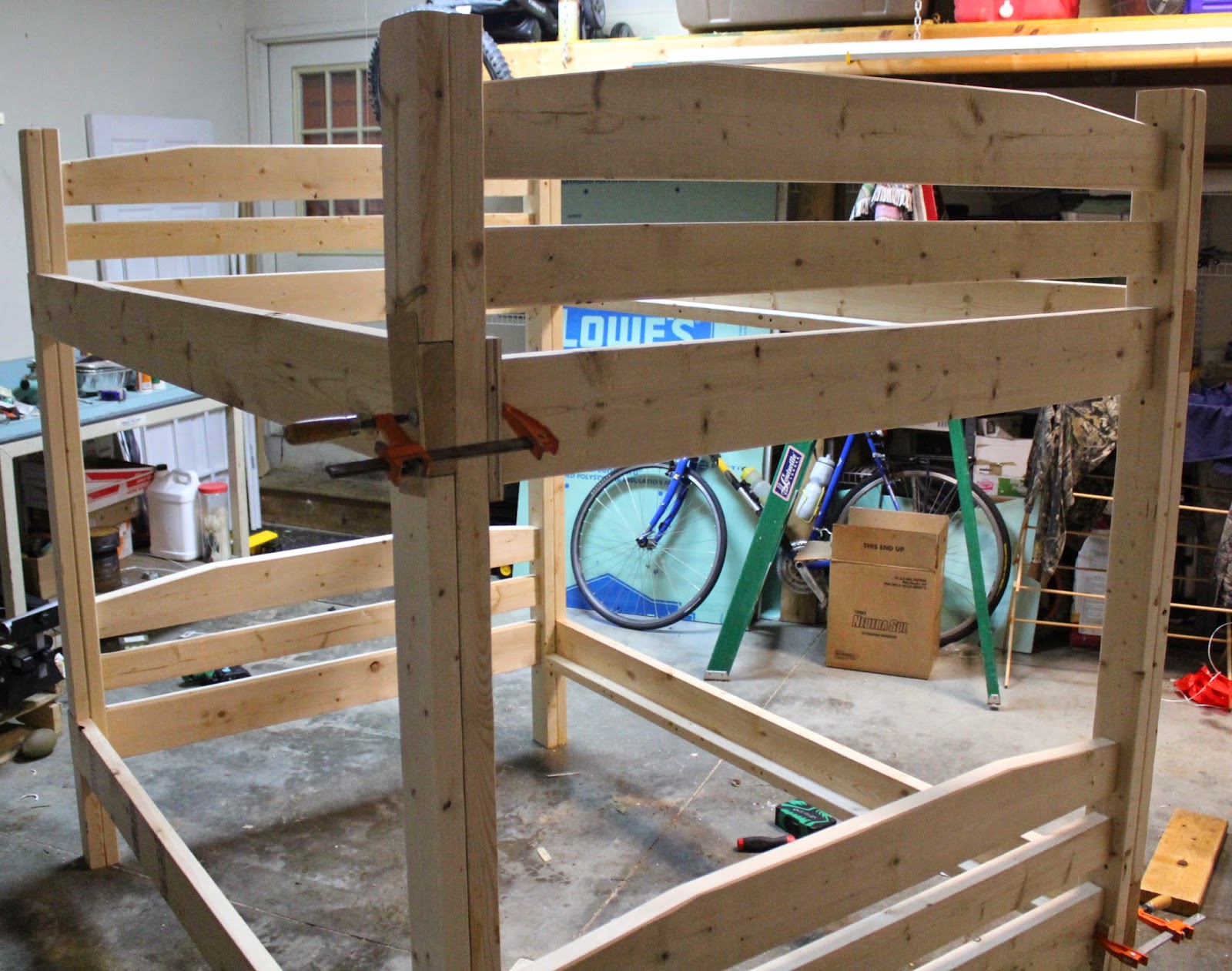 Grafting Fruit onto a junk tree

Do you know what a Bradford Pear tree is?  Anybody?  Well you can look it up here.


My neighbors had them growing up and they always stunk like dead fish in the spring. They look pretty, I guess, in the spring when they put out all those white blossoms... but they don't produce any fruit.  If you live in the suburban utopia of keeping things nice and tidy, I suppose that's good... in a weird kind of way.  But I live in the country, my third child is on it's way and the first two combined eat more than I do!  (Did I mention they are 1-1/2 and 3-1/2 years old?)  All that to say, I can't afford to have worthless tree's hanging out when I can make them do some work!  (Kind of like having kids, eh?) 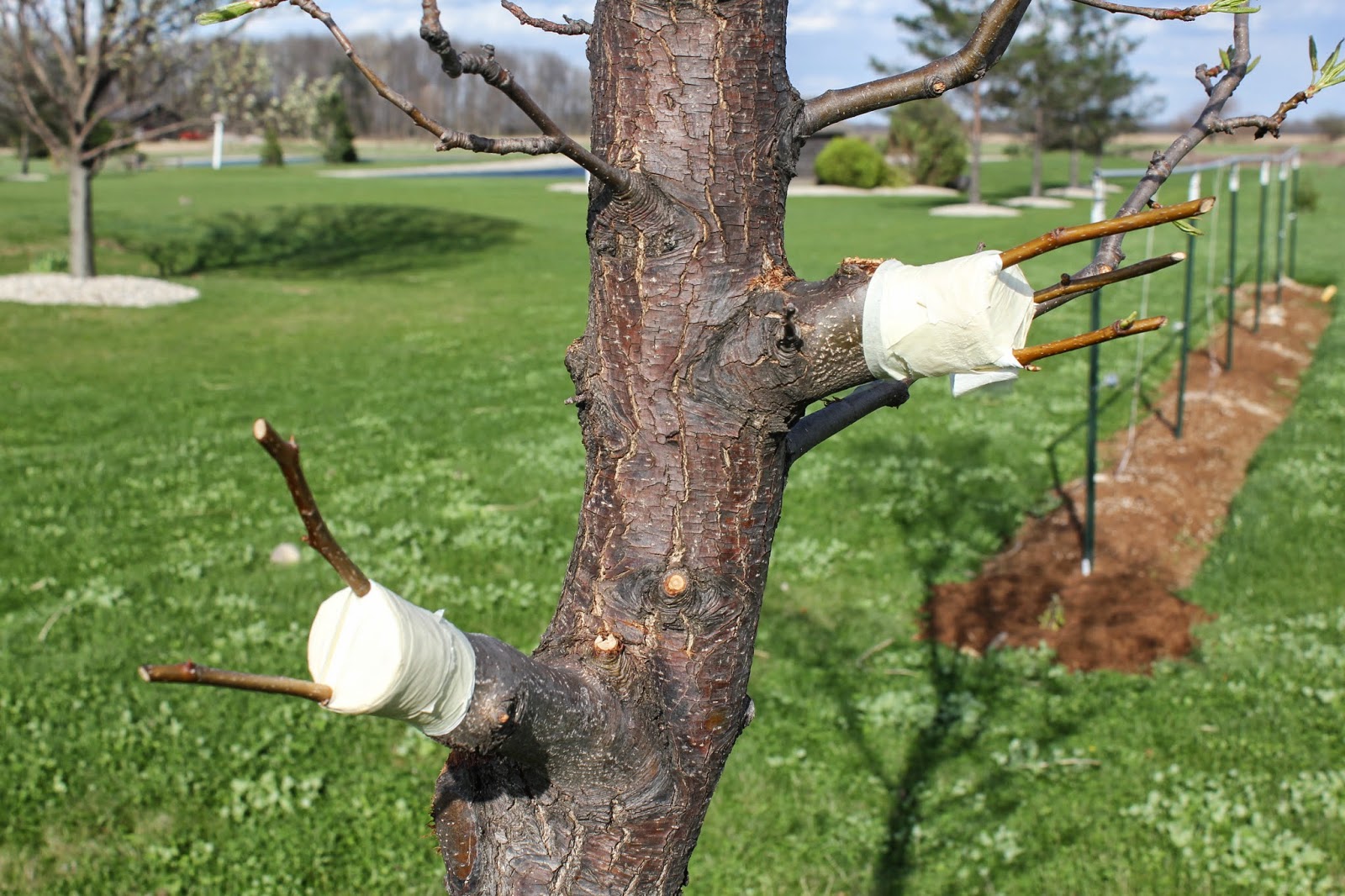 Around the beginning of April I drove past my hunting spot on the way home from work and stopped to take some cuttings off the pear tree at the end of the hedge row.  Then I came home and, with the help of my box cutter, some Teflon (pipe thread sealing) tape, a roll of masking tape, and the knowledge garnered from watching The Hollistic Orchard DVD, I proceeded to make some grafts.  I'm quite excited to see that it appears as though they were a success!  Maybe I didn't need to buy that grafting knife after all...

The Bradford Pear is a pear tree that was bread (breeding via cross pollination) to NOT PRODUCE FRUIT (because food growing on a tree is known to many people as an eye sore or more work to clean up in their perfectly manicured lawn).  All I did was take a cutting from a tree that does grow food and stuck it on the trunk of one that doesn't... and walla, a worthless tree is made worthy of keeping around!


It's that time of year again!  Unfortunately with all that has been going on I got my order in a little late.  This year we won't be getting our little birds in the mail till the first of July... and even then I could only get hens.  They are smaller birds, so they may eat less but there will also be less eating at the end of process...

Anywho, I'm going to wrap this one up and hit publish.  Have a good week!
Posted by Cj at 12:12 PM No comments:

Who else is following: