As you can see above, I've labeled all of the main components of the panel.  This unit comes (assuming you do not buy the pre-wired version) with only two breakers installed, that happen to have some hardware attached that prevents them both from being turned on at the same time; hence the transfer switch.  The line power breaker will be hooked up to the line power side and the generator power breaker will be, of course, hooked up to the generator.  Only one of these can be turned on at once, preventing you from back feeding the lines outside your house.


Everything up to this point has been the same as if I were installing an every-day sup panel.  This is the part that makes it a Generator Transfer Switch!  The first thing that I have already established in part two of my Generator Transfer Switch series is that my generator can provide 30amps at 240volts AC (alternating current).  I also covered there that this much current requires a 10ga, 3 strand wire with a ground wire.  I’ve also mentioned that the previous owners of my house had a hot tub in the room furthest from the main breaker.  Luckily, it was a 10ga 3 strand wire... Woohoo!

After I pulled the wire out and bundled it up for storage, I got to reverse this as it came time to hook it up to the sub-panel.  After coming up with a plan as to how I was going to route the generator feed cable from the sub-panel to the power inlet box, I spent a lot of time with the hole-saw putting holes in my joists so I could avoid using the staple nails... hopefully that will pay off if I ever decide to finish off the basement ceiling.


Installing a cable clamp required me to first remove the knock-out on the top of the box.  Make sure the clamp you have ready matches the size of the knockout you select!  To remove the knock-out I took a flat head screw driver, placed it over the knock-out (see image below), right next to the edge, and smacked the top of your screw driver with a hammer.  Then I used a pliers to bend it back and forth till it snapped off.  There might be a better way, but that worked for me just fine. 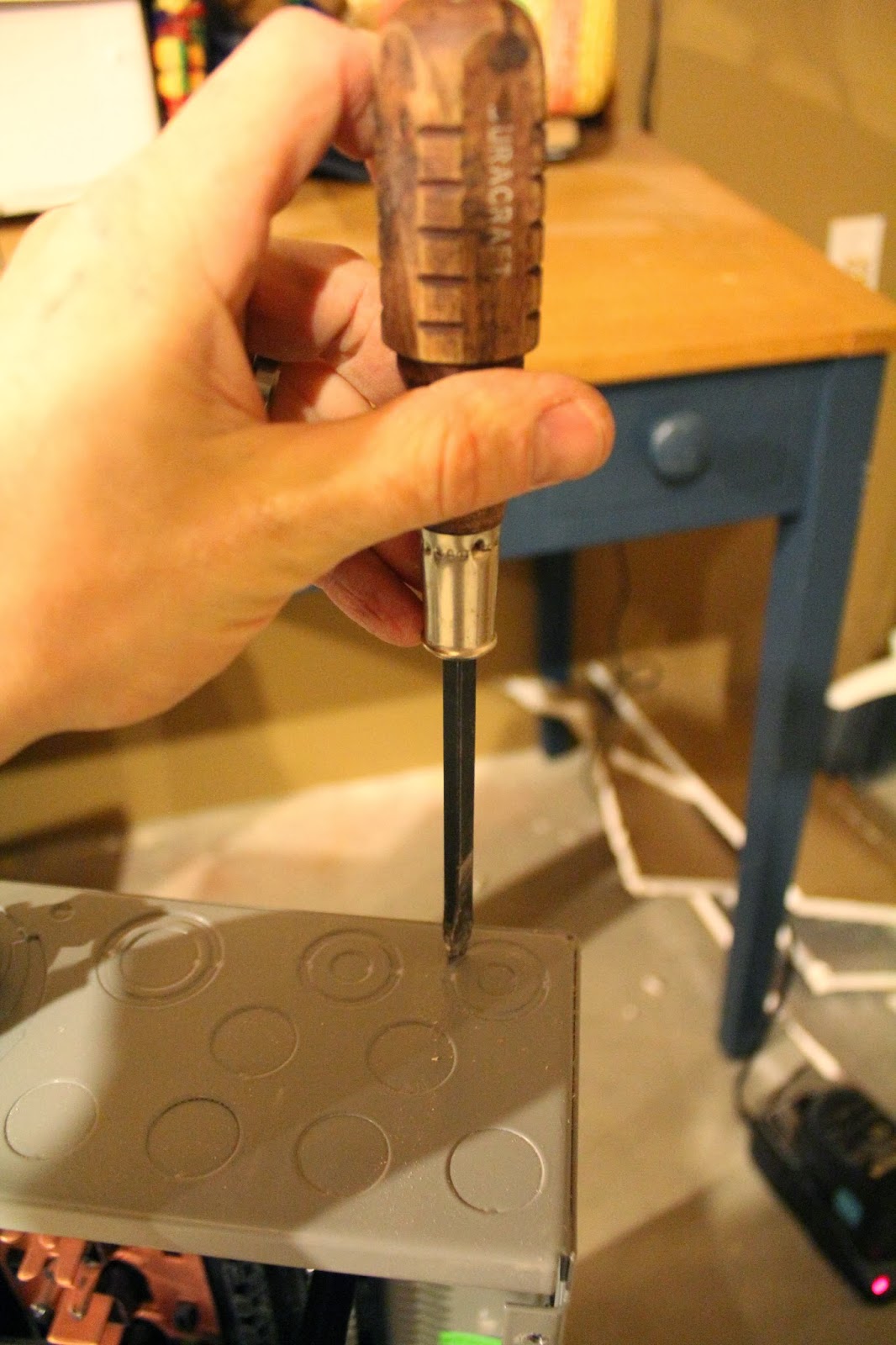 With the insulation stripped back and the wire clamped in place, I was then able to wire the feed cable into the sub-panel and start wiring it in.  Reliance did provide some guidance on how to install the sub-panel (here) and the power inlet box (here) that helped me to understand everything I was doing... of course Lance, the electrician at work gave me a lot of good advice too, like using the oxidation blocker.  When I got into it, I didn’t know that white was always neutral, but figured it out after reading through the instructions for the power inlet box.


One item I should point out a this point is the oxidation blocker.  Have you ever had corrosion on the battery terminals of your car?  That's the same thing that can happen to your wires at each connection.  Your batteries suffer from this more as a result of diss-similar metals in contact with each other resulting in Galvanic Corrosion, but the same basic concept can happen when you make connections in your home wiring.  I used a product I picked up at the local hardware store...

To open this tube of wonder, you have to cut off a portion of the end of the tip.  I cut it as close to the end to make the hole at the end very small... and later trimmed off a bit more.  To coat the end of the wire, I stick it inside the tube and squeeze the tube as I pull the wire out, leaving a thick (but not too thick) coating of goop (most likely called grease).

The other end of the wire...

What you’ve seen so far was definitely the easy part.  The next decision that needed to be made was where I was going to put the power inlet box.  I was thinking I'd put it just below the siding, attaching to the cinder blocks so the wire would come in through the back... before it snowed.  You might not be able to tell, but that snow in the corner is about 30inhes deep.

After looking at the above picture, I don’t want the inlet box to be under 2ft of snow on a regular basis.  I know the inlet box is supposed to shed water from the elements, but somehow it didn’t seem like a good plan.  Therefore my father suggested I cut a hole in the vinyl siding, mount the power inlet box in the hole, and then trim it out.  This seemed like a good idea so I pulled out my new extra long masonry drill bit and away I went! A couple notes on this... I wanted to make sure I drilled through one of the hollow sections of the cinder block, hence the hole is located about 25% of the distance from one end.  The extra long bit allowed me to make a guide hole on both the inside and outside, as my 5/8in bit (just large enough for the wire) was not long enough to go through the entire block from outside.  Ready, Set, GO!


Ready... set... Stop.  So dead batteries have a way of changing your plans.  Thankfully, my father brought his hammer drill.  My drill has a hand chuck, so I don't have any chuck keys.  Dad's drill didn’t and he didn't bring one.  Needless to say, it required a little ingenuity to get the drill bit tight... without the chuck key.

With everything in place I drilled larger 5/8in holes on the inside and outside of the cinder block and threaded the wire through.

This is another time you should consider measuring twice and cutting, or in this case drilling, once.  Inside the crawl space I had a wonderfully installed Radon Mitigation System... my hole was just barely high enough that I was able to work around it.  It sure could have gone worse!

Now that I have a bare wire sticking out a hole in my foundation and going 3ft up to a power inlet box for my generator, I have a problem... what if some little boy with a weed eater one day wonders what will happen if he attacks that wire with it?  What if some little boys want to try out their pocket knife on it?  What if blah blah blah...  The answer is Conduit.  It is designed to protect electric wires from little boys, weed eaters, pocket knives and more.  In a following post I'll talk to you more about how I assembled all of my conduit.

Wiring up the box isn't too bad.  I've heard rumors that wiring it up for a 50 amp circuit can be a little challenging as there is not enough room in the box to connect the wiring and then put the cover on.  But for my application, I didn't have any real problems.  Once I pulled the wire through the conduit I stripped the primary insulation back about 5 inches, just long enough that it was still stickup up through the collar on the conduit.  Then I stripped back about a half inch of insulation around the individual wires, or conductors, and inserted them into the back of the cover/plug.  The red and black wires went into the holes labeled X and Y receptively, while the white went into the neutral hole labeled W, and the bare ground wire was attached to the greenish-blue screw in the top right of the box in the picture above.  The back of the plug has another wire that attaches to this screw, so make sure those are both connected!  Again, for each of these connections I applied the oxidation goop.  In this instance, I think it to be even more important than indoors, as in an outdoor environment, there is likely to be more moisture condensing out of the air and settling on the bare wires... causing more corrosion.  I could be wrong, but why take the chance?  The Ox-guard wasn't too much more than $5.

I'll try to remember to take a picture the next time I get the cover off, but you may have to wait till the weather warms up a bit!

Till next time, Enjoy!

Who else is following: